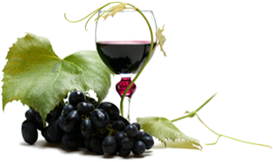 Legends, myths and traditions, since the most ancient origins of our history, have made it difficult to identify the origins of the cultivation of the vineyard, it is difficult to identify. However, beyond the poetry and folklore, certainly the cultivation of the vineyards began in very remote times.
Apparently, the man discovered the 'almost' magical properties of fermented grapes already in the Neolithic period, in fact it gave the moderate drinker the "wise forgetfulness of life", as Dante himself wrote.
Many doubt about the origin of the vine or if our vines, commonly called European vines (Vitis Vinifera), should be considered as native plants or have been imported into Italy through human migrations from Asia Minor.
Surely, the grafting and the coupling of various screws has allowed the birth of countless varieties of vines.
Already in the fifth century BC, Sophocles called Italy "a favorite land of God Bacchus".
Even at the time of Homer, Sicily produced large quantities of wines. In fact, just an episode of the Odyssey seems to focus precisely on wine, that is when, near Etna, the Cyclops Polyphemus, blinded by Ulysses, fell asleep in a deep sleep after drinking a large amount of wine.
Even the Etruscans, departing from the East, already strong of a very advanced agriculture and that included the invoice of the wine, arrived in Italy on the shores of the Tyrrhenian Sea around the year 1000 AD, have contributed to the spread of the vines. So much so that Pliny tells of a statue carved from a single vine plant in Populonia.
There is no doubt that, since the time of Pliny the Elder, Italy was first in the cultivation of the vine and in the production of wine, for quality and high quality. In fact, in his "Historia Naturalis", Pliny himself speaks of as many as 195 varieties of wines, half of which were produced in Italy. Among the most famous wines of ancient Italy, we find the "Tauromenitanum". This was a wine that was produced in the Greek-Roman period in the territory of Taorminese and, according to Pliny, was a wine of extraordinary quality, so that, according to some historical evidence, the tauromenitanum was also used in Sicily in the ceremonies in honor of Apollo.
History and historians also give us acknowledgments and certificates of quality. In fact, just through Pliny, we know that the "eugenia vitis of Taormina" was transplanted on the Alban Hills in Lazio, it was the Tauromenitanum, cultivated as we said in the hills of Taormina, but today perhaps lost. There are also evident signs of a particularly extensive trade, where the main article was wine.

The origins of wine in ancient Rome
Until the Republican era, wine could be tasted only by males over the age of thirty. For women there was trouble if you find drinking: for example, if kissing his wife the husband had perceived the taste of wine, would have been authorized to severely punish his wife for the "transgression". The prohibition was abolished by Julius Caesar, and so Livia, wife of the first Prince, Augustus, was able to write that he had achieved a remarkable and healthy old age thanks to the wine that had enlivened his meals.
In the first century BC Diodoro Siculo writes how, since the most remote times, viticulture and vinification were the arts practiced in the area of ​​the province of Messina, as found in the Mycenaean finds, mostly found in the Aeolian Islands, which allow to date this presence to the 14th Century before Christ.
Diodoro Siculo claimed that the vine grew spontaneously in Italy and that it had not been imported by other peoples. It was kept by the indigenous people, uncultivated, that is in the wild. Even Pliny, for his part, reports that since the beginning of ancient Rome there were unripe vines.
The Romans reached a deep knowledge of the secrets of the cultivation of the vine and the vinification, having learned such secrets from Etruscans, Greeks and Carthaginians and, just from the latter, they learned to build rational farms and able to produce, with great gains. As is well known, the Romans had the sense of business, everything had to be organized and productive.
Specialized plantations were created to conduct schiavile, where the great wines of the past were cultivated.
Always following Plinio's testimonies, we learn that since the middle of the first century a. C., Italian wines began to enjoy a reputation equal or superior to that of the best Greek wines
The expansion of viticulture in Sicily and southern Italy soon led to a contraction of wine imports from the Aegean and Greece, and in the third century. B.C. Italy no longer limited itself to producing for internal needs, but also for export and continued to develop especially in the first half of the second century BC. c.
Among the exchanges